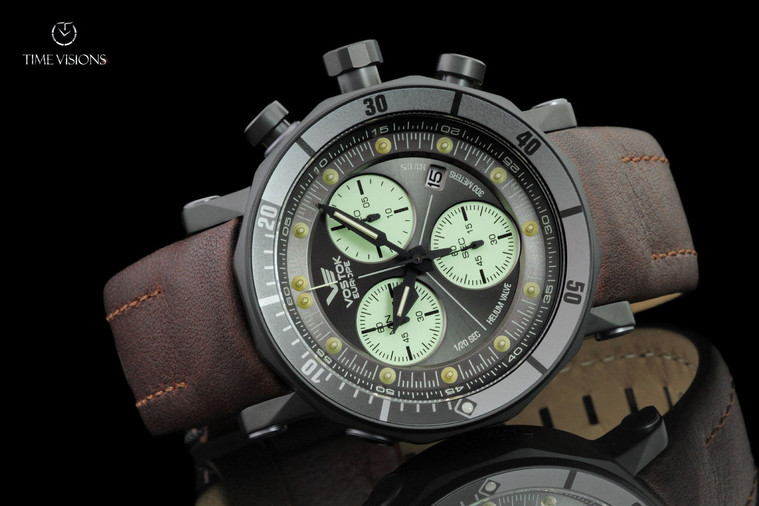 This impressively designed timepiece begins with a round, stainless steel case complete with a unidirectional rotating bezel that features Arabic numerals at every 10-minute mark. A case-coordinating screw-down crown rests between two function pushers along the side. This large, 49-mm timepiece ships with a genuine brown leather strap and includes an interchangeable silicone rubber strap, both securing at the wrist with a buckle clasp. A very cool feature that we have never seen on another watch is the stand up “candle holder” vertical placement of the luminous tritium tubes. They appear at every hour, with Arabic numerals tracking along the outer dial every five minutes, and are supported by small reflector dishes that help direct the illumination toward the crystal. Luminous tritium tubes light up the hands, making visibility of the time in any light easy (be sure to check out our original video to see the nighttime glow in action). Three subdials rest upon the sunray dial: a 1/20 seconds subdial floats at 2:00, a 60 seconds window appears at 6:00, and a 60 minute subdial rests at 9:00. A date window makes a home at 3:00. This Lunokhod is pressure sealed to an impressive 300 Meters (30 ATM) of water resistance. It also offers a helium release valve. Both sharp and functional, this is one of our favorite Vostok-Europe models!

The black Vostok-Europe dry box contains the instruction manual plus paperwork for the 2-year manufacturer's warranty. Also included is the extra black silicone strap and a custom Vostok-Europe screwdriver that allows for easy exchange of the 2 straps. We've included original photos and a video of the model we are selling. If you have ANY questions regarding this watch, please drop us an email for a quick response.

The vast majority of watches that offer a nighttime glow use a type of chemical coating that absorbs energy during periods when it is exposed to natural or artificial lighting. It then emits this energy in the form of a glow which is visible in dark environments. The only problem with this method of illumination is that the length of the glow is proportional to the amount of time the watch has been exposed to a light source. If you put this type of watch in a dresser drawer for several hours, there will generally be no "charge" remaining, and there is no visible glow. Tritium tubes take watch illumination to the next level. Tritium tubes are glass tubes that are filled with tritium gas and sealed by a laser. This gas then reacts with a coating on the inside of the glass tube to produce a constant glow. This glow requires no "charging" by any external light source. If you put a tritium tube watch in a desk drawer for 6 months, the moment you take it out, it is glowing. Tritium tubes, which are sometimes referred to as "gaseous tritium light sources" (GTLS), are produced by a single company, mb microtek of Switzerland. They add considerable cost to the price of any watch, but if you are a fan of great watch "lume" patterns, there simply is no substitute.

Based in Vilnius, Lithuania, Vostok-Europe fuses two of the most exciting elements in the watch industry today: a great story for each model and construction designed for the most extreme activities. With watches tested in the Dakar Rally, at the bottom of the world, to the edge of the atmosphere and beyond, Vostok-Europe truly is for going to extremes. Couple this with each watch being inspired by a Russian achievement in engineering or exploration, and Vostok-Europe watches just don't tell time, they tell a story. Every Vostok-Europe timepiece is constructed and built to withstand the most rigorous conditions, from deep diving to space explorations; many use the constant illumination technology of tritium tubes; and all are Built for Going to Extremes!

Lunokhod 2 (аппарат 8ЕЛ№204) was more advanced and the last of two unmanned lunar rovers landed on the Moon by the Soviet Union as part of the Lunokhod program. The launcher put the spacecraft into Earth parking orbit on January 8, 1973, followed by translunar injection. On January 12, 1973, Luna 21 was braked into a 90 by 100 km (approx. 56 by 62 mile) lunar orbit. The Luna 21 spacecraft landed on the Moon and deployed the second Soviet lunar rover, Lunokhod 2. The primary objectives of the mission were to collect images of the lunar surface, examine ambient light levels to determine the feasibility of astronomical observations from the Moon, perform laser ranging experiments from Earth, observe solar X-rays, measure local magnetic fields, and study mechanical properties of the lunar surface material. The landing occurred on January 15, 1973 at 23:35 UT in Le Monnier crater at 25.85 degrees N, 30.45 degrees E. After landing, the Lunokhod 2 took TV images of the surrounding area, then rolled down a ramp to the surface at 01:14 UT on 1973-01-16 and took pictures of the Luna 21 lander and landing site.

Lunokhod 2 was equipped with three slow-scan television cameras, one mounted high on the rover for navigation, which could return high resolution images at different rates—3.2, 5.7, 10.9 or 21.1 seconds per frame (not frames per second). These images were used by a five-man team of controllers on Earth who sent driving commands to the rover in real time. There were four panoramic cameras mounted on the rover. Power was supplied by a solar panel on the inside of a round hinged lid which covered the instrument bay, which would charge the batteries when opened. A polonium-210 radioactive heat source was used to keep the rover warm during the long lunar nights. Scientific instruments included a Soil Mechanics tester, Solar X-ray experiment, an Astrophotometer to measure visible and Ultraviolet light levels, a Magnetometer deployed in front of the rover on the end of a 2.5 m (8 ft 2 in) boom, a Radiometer, a Photodetector (Rubin-1) for laser detection experiments, and a French-supplied laser Corner Reflector.p to the surface at 01:14 UT on 1973-01-16 and took pictures of the Luna 21 lander and landing site. Results Lunokhod 2 operated for about 4 months, covered 37 km (23 mi) of terrain, including hilly upland areas and rilles, and sent back 86 panoramic images and over 80,000 TV pictures. The 37 km journey remains the longest any robotic rover has ever been driven on another celestial body. Many mechanical tests of the surface, laser ranging measurements, and other experiments were completed during this time.

This watch comes with a two year manufacturer's warranty.